"Band in Boston" is the 9th episode of the first season of The Suite Life of Zack & Cody. Zack, Cody, Max and Tapeworm make a band called Rock Squared to compete in the band competition at the Tipton, but the band is partly broken up when Zack and Cody fight over which is more important to the band: the looks, or the song.

Zack, Cody, Max, and Tapeworm decide to start a band called "Rock Squared" to win the event at The Tipton Hotel, The Battle of The Bands. Whoever wins gets their own record. But, Zack only cares about his clothes and keeps on messing up the words.

Cody is too serious and only cares about the way the music sounds and is too strict with the band. They fight and Cody starts a new band with Arwin and Muriel, taking his lyrics along with him. Max and Tapeworm realize that they can't do it without Cody, so they lock the two in a closet to let them work it out.

Max tells Muriel to let them out when they work it out (and to let them out in 10 minutes) but Muriel falls asleep. When the band is getting ready, Zack and Cody aren't there, so Max and Tapeworm go to look for them, finding out that they crawled into the air conditioning. When it's their turn to perform, Zack and Cody finally arrive, with the help of Arwin.

Meanwhile, Maddie and Lance's band (Waterworks) is having trouble too. Someone got water in their instruments, and Maddie is really upset, saying how she needed that record, so she can get rich. When London hears Maddie saying, "What, no one has that much money" she starts laughing and says that she will fix the instruments on the condition that London can be in the band. After playing the tambourine and complaining, Maddie and Lance decide to let London sing with Maddie. But they find out that London sings horribly.

So, the night they perform, they turn off London's microphone so you can't hear her singing. When London figures it out she thinks her microphone broken so she asks to share with Maddie. Maddie says no and London asks why.

Then Maddie blurts out, without thinking, "Because you're a lousy singer!" London, hurt & embarrassed, runs off the stage and into the lobby. Maddie follows her into the lobby, apologizing. London forgives her, saying, "You know, Daddy owns a few record companies, I could've made a CD anytime. But, now that I know I'm a lousy singer, what's the point?" Maddie stares at her open mouthed. Rock Squared ends up winning the competition.

Cody: I can't understand the words. What I wrote is "I missed the bus as it came around."
Zack: Who cares?
Cody: I do! "School's Out" is an exposé of the trials and tribulations endemic to the public school experience!
Zack: Do you know what he just said?
Max: Yeah, he never gets girls.

London: I don't like this tangerine!
Maddie: No, that's a tambourine! A tangerine is what the audience is gonna throw at you.

Carey: (to Zack) Did I ever tell you about when I was in my first band?
Zack: Yes.
Carey: And how we couldn't work together and eventually broke up?
Zack: Yes. And then your boyfriend stole your car and ran off with your best friend...
Carey: Yeah, yeah, okay. And what did we learn from that story?
Zack: You need to pick better men?

Carey: (to Cody) Did I ever tell you about when I was in my first band?
Cody: Yes.
Carey: And how we couldn't work together and eventually broke up?
Cody: Yes. And then your boyfriend stole your car and ran off with your best friend.
Carey: Yeah, we don't want to relive that part. Now what can you learn from that.
Cody: That I was right and Zack was wrong.
Carey: That's not what... (Cody leaves) Oh, well, I'll try again later.

Maddie as a singer

Zack on the guitar 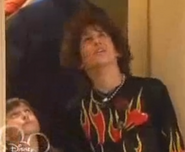 Waterworks
Add a photo to this gallery
Retrieved from "https://suitelife.fandom.com/wiki/Band_in_Boston?oldid=76786"
Community content is available under CC-BY-SA unless otherwise noted.