Christmas at the Tipton

"Christmas at the Tipton" is the 21st episode of the first season of The Suite Life of Zack & Cody. Zack, Cody, and the entire gang get snowed in at the Tipton. Maddie rigs a "Secret Santa" bowl so that London will get her an extravagant gift.

This episode lasts during Christmas Eve and Christmas Day.Everyone's Christmas plans are canceled when a snowstorm pushes everyone into the Tipton, even a couple expecting a baby. There are no rooms available for said couple, so they stay in the lobby for as long as they can. Arwin is seen burning many wooden items to replace the lost heating. When Kurt, the boys' father, is forced to stay with their mom, Cody begins to think that they are getting remarried. However, they are not getting back together and are just getting along for the holidays, which Zack believes but Cody still has his hopes up. Cody tries to get his dad back interested in Carey, but his dad catches on and tells him that they're not planning to remarry. Cody is devastated than he was unable to get them back together and doesn't believe that having divorced parents follows a traditional family Christmas. Zack attempts to cheer up Cody; but shortly thereafter, Zack, Cody, and the mother of the baby are trapped in the elevator due to the storm, and the mother starts to give birth. After the baby is born, the elevator takes them back down to the lobby, where the guests and the employees, including Kurt Martin, say hello to the newest member of the Tipton. Carey and Kurt reassure Cody that even though they are divorced, they are still his parents and still love him, just like the new parents love the newborn child.

Side-plot: London is involved in the Secret Santa exchange and Maddie rigs the bowl of names so London will choose Maddie and buy a gift for her. Maddie is hoping for an expensive, fancy gift from London because she's rich and spendy. Yet with the advice from Mr. Moseby, she gives Maddie a badly hand-knit sweater and tells Maddie that she is making the gift rather than buying. The sweater has multiple arm-holes and no neck. Maddie tries to be nice, but is in utter disbelief at the cheap sweater and London realizes and tells Maddie that she should be happy she got something. After using the sweater as a baby blanket for the new baby, Maddie realizes the sweater isn't so bad, and apologizes to London for not being grateful earlier.

Esteban: I just love watching the white fluffy things falling from the sky!
Cody: It's called snow, Esteban.
Esteban: Well, it's like the heavens have dandruff.

Cody: Tell us more about that magic moment when your eyes first met.
Carey: Well, my eyes were trying to meet the drummer's, but your father kept getting in the way.

Zack: What are you talking about? You're going to Club Desperate in the Caribbean.
Carey: That's not true! It's in Mexico and it's Club Desperado.

Cody: Isn't this weird? Mary and Joseph traveling together...
Zack: ...on Christmas Eve.
Maddie: But there's no room for them at the inn.
Arwin: And a child is born!
Esteban: What a coincidence.
London: I don't get it.

Mr. Moseby: Arwin!
Arwin: What?
Mr. Moseby: NOT THE FRONT DESK!
Arwin: But it's so big and wooden!

Arwin: This is the best Christmas ever! (runs out of the lobby, whilst singing) JOY TO THE WORLD, LET'S BURN SOME CHAIRS!...

Zack: What should I do now?
Cody: Catch the baby when it comes out.
Zack: So not happening. 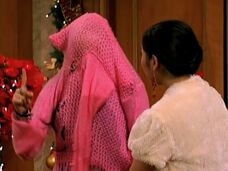 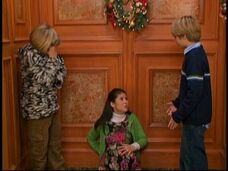 Mary going into labor while Cody tries to comfort her through it. 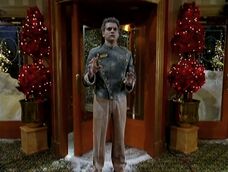 Esteban frozen after going outside.
Community content is available under CC-BY-SA unless otherwise noted.
Advertisement