Dylan Thomas Sprouse and Cole Mitchell Sprouse, commonly referred to as the Sprouse Bros. or Sprouse Twins, are the portrayers of the protagonists in the popular Disney Channel show The Suite Life of Zack & Cody, its spin-off The Suite Life on Deck, and the spin-off movie.

Besides The Suite Life series, the twins are also known for their role in Adam Sandler's Big Daddy, in which they both played the same character (Julian McGrath) in different scenes. Because of their work in The Suite Life of Zack & Cody and The Suite Life on Deck, the twins have become very popular among kids aged nine to sixteen, notably becoming heartthrobs to many fans.

Identical twins Dylan and Cole Sprouse were born in Arezzo, Italy, on August 4, 1992, to parents Matthew Sprouse and Melanie Wright. Dylan was named after Dylan Thomas and Cole after Nat King Cole. Despite being born in Italy, the twins were raised in their parents' hometown of Long Beach, California.

In early 1993, the twins began their first role at six months old in a toilet paper commercial, apparently getting the role as they were the only babies in the green room that were not crying. They would switch off-screen for several scenes. Later that year and until 1998, the two got a dual role as Patrick Kelly in Grace Under Fire, again switching for one another during different scenes.

In 1999, the twins landed their first major role in Big Daddy, a feature film starring Adam Sandler, marking what would be the beginning of their feature acting career. Following this movie, they jumped around to minor roles in The Astronaut's Wife, The Chanukah Song, I Saw Mommy Kissing Santa Claus, and Just for Kicks, among others. Returning to work with Adam Sandler once more, the two did voiceover roles for his feature film, Eight Crazy Nights.

After being involved with a few direct-to-video family movies, the twins were approached by Disney, where Danny Kallis had an idea to base a television show off their lives, living in hotels as they went across the country to perform in different productions. Though the series was initially to be titled The Suite Life and then The Suite Life of Dylan & Cole, the characters' names were changed to Zack and Cody.

Along with their work on The Suite Life, they also starred in a Sony Pictures film, The Prince and the Pauper.

Aside from acting, the twins developed their own brand (the "Sprouse Bros. brand") and started their own book series, 47 R.O.N.I.N., about teenaged brothers who become spies for their undercover dad.

In 2008, after The Suite Life of Zack & Cody aired its 87th episode, a spin-off was introduced that would take Zack and Cody's characters to sea and away from their home life, where they would learn to live like adults.

In late 2010, an announcement was made by Disney that there would be a movie made from the series, which would also star Dylan and Cole. 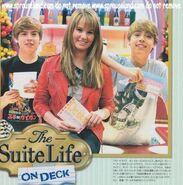 Retrieved from "https://suitelife.fandom.com/wiki/Dylan_and_Cole_Sprouse?oldid=76951"
Community content is available under CC-BY-SA unless otherwise noted.