Start a Wiki
Hannah Montana (Miley Cyrus) is one of the recurring characters of The Suite Life series.

Her first appearance was in That's So Suite Life of Hannah Montana, at the final, when she will be staying at the Tipton for a concert in Boston. Later than her first walk, many of the characters resemble by Hannah's fans. Arwin dismayed when he saw her; also, Zack, Cody, Maddie, London and Raven Baxter (of That's So Raven) was impressed to see her.

In "On the Road Again?" (the third episode of "That's So Suite Life of Hannah Montana", a Hannah Montana's episode, Maddie appears and Hannah told her as a friend, also, she thanks her for the tickets for her concert in Boston.

In some years, she wants go with her best friend, Lola Luftnagle (customed Lilly Truscot, played by Emily Osment), to the S.S. Tipton, in the episode Wizards on Deck with Hannah Montana. As the first image told us, maybe Hannah & Lola are hiding for an unknown reason for the moment. 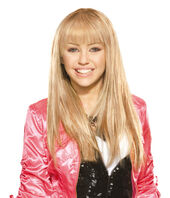 Hannah with Lola and Zack in "Crossover"

Hannah in Tipton's Lobby
Add a photo to this gallery

Retrieved from "https://suitelife.fandom.com/wiki/Hannah_Montana?oldid=74965"
Community content is available under CC-BY-SA unless otherwise noted.