"Health and Fitness" is the 34th episode of the second season of The Suite Life of Zack & Cody. After Carey reads about healthy eating during Health and Fitness week, she insists that Zack goes on a "cold turkey" diet, and Cody tries to help Chef Paolo eat better. Meanwhile, London and Maddie try to make their figures better to fit dresses for a fashion show.

Carey is concerned about Zack's eating habits so she switches his diet to eating meat, bread, fruit, and vegetables. In a similar way, Cody notices that Chef Paolo is distressed about his cholesterol test not going well, and vows to help him. However, Chef Paolo doesn't adjust to this well, and Cody discovers his bad habits, such as eating an entire pot of soup while unsoupervised. These habits continue, including Chef Paolo attempting to sneak food past Cody after receiving praise for doing so well to avoid overeating. Cody decides to take Chef Paolo under his wing and have him spend the night in the twins' apartment to avoid the allure of the food at home. At midnight, Chef Paolo looks for a snack, only to be discovered by Zack, doing the same thing. The two decide to go down to the hotel kitchen where they keep a ten-pound block of chocolate.

Carey and Cody discover Zack and Paolo violently gorging themselves in the kitchen. Carey manages to compromise with Zack to moderate his diet, and the two head back up to their suite. Cody remains with Paolo, and chews him out for indulging against Cody's desperate teachings. He stands up to the chef, and storms out, vocally having given up on him. The next day, Cody discovers that Chef Paolo has finally digested what Cody was trying to say, and has started taking an effort to eat better.

Meanwhile, as part of the health and fitness week that spawned the cholesterol test, London and Maddie participate in a charity fashion show. They get insulted by Francesca (one of London's rich friends) and then, after getting fooled by their own body dysmorphia in a mirror, both decide that they need to handle their weight issues before participating in the fashion show. Because of dissonance spurred from said dysmorphia, London vows to lose weight (anorexia) and Maddie decides she must eat more to avoid being underweight (this is not an eating disorder that exists at all. Saying binge eating disorder is being generous at best). After London starves herself to the point of dizziness and Maddie feels gassy and bloated from having eaten multiple fast food burgers in a single day, the two prepare for the show. However, as a result of their dangerously fallible methods, they both muck up their chance on stage. They end up exposing Francesca stuffing her bra, slut shaming her on stage. The two young women then agree that they're fine just the way they are; seeking validation from random, strange men. This leads them to ground their self image in the men’s validations.

London: I'm hosting a junior fashion show at The Tipton to go along with the health and fitness week. We're raising money to get kids free infections!
Maddie: You mean injections?
London: Details.

Maddie (about Francesca): I thought you couldn't stand her.
London: I can't. She's a horrible person, she's nasty, catty, and rude!
Maddie: Then why did you invite her?
London: Because she's one of my best friends!

Cody: Chef Paolo, what's wrong?
Chef Paolo: It's my blood test. It did not turn out so good!
Zack: Come on Chef, how bad can your blood be?
Chef Paolo: They found bacon bits!

London: Francesca, could you please stop insulting Maddie? Her life is pathetic enough without you. (looks at Maddie) Don't say I never defend you.
Maddie: Can I say you never defend me well?

Carey: (to Zack) I don't know why you're making such a big deal out of this. Lots of kids love eating fruits and vegetables. Why can't you be more like them?
Zack: I thought you didn't want me to give in to peer pressure.
Carey: Honey, you have a problem.
Zack: I do not!
Carey: I found licorice in your underwear drawer!

London: Francesca, remember that we only criticize people that we pay.
Francesca: (To London) Alright, your butt is huge. (To Maddie) And you have chicken legs. (hands both of them money)
Francesca: Best 50 bucks I ever spent. (walks away)

Maddie: Ooh, what do you think of this one? (holds up a dress)
Francesca: Oh, it's hideous.
Carey: I think it's gorgeous.
Francesca: Thank you, but we really don't need an opinion from the help.
Carey: I'm not help.
Francesca: You're telling me. I ordered a mocha frappe 10 minutes ago and nothing.
Carey: Oh, I'll give you a frappe. 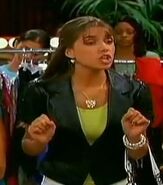 Add a photo to this gallery
Retrieved from "https://suitelife.fandom.com/wiki/Health_and_Fitness?oldid=77012"
Community content is available under CC-BY-SA unless otherwise noted.