Maddie on Deck is the 13th episode of the first season of The Suite Life on Deck. Maddie Fitzpatrick makes her long-awaited appearance on the show when she visits the S.S. Tipton. But as it stops in Liechtenstamp, eight-year-old Prince Jeffy falls in love with her, and tricks her into marrying him, much to her disgust. However, Zack challenges Prince Jeffy to a joust with Maddie being the prize.

The episode starts when Cody helps London put a banner up which is a welcome sign for Maddie (her name in small print under "London Tipton Welcomes"). When Zack, eating a sandwich he found in his underwear drawer, and Bailey come to the "Sky Deck", they start to talk, and when Mr. Moseby comes, they start to talk about what to do first when Maddie comes, in the middle of the conversation, she comes, but they are too busy arguing about her to notice her. After a couple minutes of fighting, they finally notice her and give her a warm greeting.

Cody tells her the old Cody (the nerd) was left in Boston (but then he accidentally pokes her with his astronaut pen), Maddie comments on Mr. Moseby's knee socks (part of his new, dorky wardrobe, and he mentions his new crest.) Maddie meets Bailey and finds out that she is London's new roommate (and she asks if London gives her room for her clothes which Bailey says that she has been upgraded to a hook.) She finally greets Zack, and she almost gives him a hello hug and a kiss, but then he runs away to vomit from the sandwich he ate.

When they come to Linchtenstamp, a herald (Harold the Herald), told Maddie the Prince Jeffrey fell in love with her, and he wants to invites her to be his date at the dance that night, and she (even though she doesn't know what he looks like) accepts. Later that night, they go to the party. Zack tries to impress Maddie with a rose, but gets beat out by the prince's bouquet. After a bit, Maddie finally meets her prince. Yet, it turns out, Prince Jeffrey is only a child, they dance at the ball, and the group makes fun of Maddie for her prince wasn't really the Prince Charming she was looking for. Prince Jeffy gives a bouncy ball to her, and the night ends with her helping him with his math homework. The next day, on the S.S. Tipton, Maddie is relaxing with Bailey and London when the Harold the Herald comes and tells Maddie she will be married with the Prince Jeffrey because when she accepted the ball thus accepting the marriage. Unfortunately, Maddie can't escape (both literally and from the marriage) due to the prince declaring "tap-tap and no-give-back" on the ball and the ship can't leave on pain of being sunk with a cannon.

Later, Cody discovers Maddie doesn't have to marry the prince if anyone, even "a worthless peasant" (a.k.a Zack) wins a fight for the maiden (Maddie) against the prince. Later, at the wedding, Zack challenges Prince Jeffy, and ends up jousting him.

In the battle, Jeffrey wins the first two rounds, but when Maddie kisses Zack, he wins the third, and Jeffrey quits the duel and runs off crying. Maddie realizes that Zack was really her Prince Charming, and Zack says that Maddie was always his Princess. Next, when Maddie hears that Prince Timmy, Jeffrey's brother, wants to have a date with Maddie, she runs off with Zack (seeing she already went through that and she doesn't want to do it again). But it turns out Prince Timmy is a good-looking teenager, and London goes out with him. 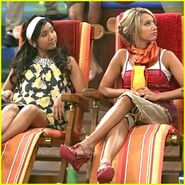 Maddie and London on beach chairs

Add a photo to this gallery
Retrieved from "https://suitelife.fandom.com/wiki/Maddie_on_Deck?oldid=76750"
Community content is available under CC-BY-SA unless otherwise noted.