Marcus Little is a main character from mid-season 2 to early season 3 of The Suite Life on Deck. He is a new student that joins the S.S. Tipton. He used to be a famous singer called "Li'l Little" but sadly lost his career once he aged. Marcus is good friends with Zack, Bailey, Cody, London, Woody, and Addison.

He is portrayed by Doc Shaw.

Marcus originated from Atlanta. He was signed by an unknown record label when he was very young and became an instant success with his number one hit 'Retainer Baby'. This song went gained Triple-Platinum status, however it is implied by Cody that this is due to the song being handed out in cereal boxes. Under the disguise of his stage name, Li'l Little, Marcus relished in fame for short amount of time, until his record label dumped him when his voice broke and he got bigger.

When he was very young he was signed to his Uncle Clarence's record label and had a hit song "Retainer Baby". It is known that he became friends with Jordin Sparks and Flo Rida. In his teens his Uncle began to ignore him and dumped him from the label. In the episode "Crossing Jordin", it is shown he believes his friends make him look bad in front of celebrities.

Marcus is a friendly, caring person who doesn't like getting into trouble and always gets good grades by getting As, Bs, and Cs. Initially Marcus is shown to be resentful towards those who use him for his celebrity status, such as people asking him to get them autographs. However he is eventually persuaded by Mr. Moseby that his fans only care about him and the reason that they want autographs is because they are crazy about him and around his friend on the S.S. Tipton, as he believes they are not cool enough. Marcus is also shown as quite gullible, in believing his friend Woody's tall tales. He really likes girls, especially London.

London Tipton - Since Marcus moved aboard the S.S. Tipton, he instantly grew a crush on London. Although London doesn't return his feelings, she admires the fact that he thinks she is cute. Marcus is continually shown to show his affection for London through professing his love out loud or becoming very weak around her. Marcus is very protective of his time with London, as shown in The Defiant Ones, when London hugs him for being brave, he silences Cody to stop him from telling her it was all fake. In Bon Voyage Marcus carries London.

Jordin Sparks - It is unknown how close Jordin and Marcus were, but she seems pretty hurt when he decided not to return her emails in Crossing Jordin. The two became close friends when Marcus was famous, however when his record label dumped him, he was so embarrassed he cut off all his celebrity friends. Jordin also was happy to hear Marcus,Cody and Zack's song in Crossing Jordin. 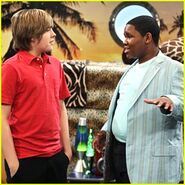 Marcus Little has been absent from five episodes.

He left the show in Bon Voyage so Doc Shaw could focus on his new show titled, "Pair of Kings".