"Prom Night" is the 21st episode of the third season of The Suite Life on Deck. Mr. Moseby discovers that students in the senior year have pulled a prank on the ship, and cancels the prom. Zack devises a plan to hold a secret prom instead, with Bailey gunning to win prom queen. Aside from Bailey's ambitions, Woody hopes that he will share his first kiss with Addison during the prom.

With the school year working its way to a close, the seniors begin making their way into Mr. Moseby's cabin in an effort to make him fall asleep for the senior prank. Once he does, they cast him into the sky, his chair attached to several dozen helium balloons.

Meanwhile, Bailey begins collecting votes. She begins making t-shirts, hats, pins, and begins to annoy everyone on the ship—even Cody. Back in his cabin, Woody reveals to Zack and Cody that, though he has not asked her, he wants to take Addison to prom where they will share their first kiss. Because Woody has never kissed a girl, he asks Cody to teach him how. Cody decorates a ham with pineapples as eyes and lips and lets Woody practice on it, including sweet-talking it. But when Addison is about to walk in and ask him to go to the prom, she overhears him asking the ham to share a kiss, and walks away distraught.

In class the next day, Bailey and Maya begin to quarrel about the importance of prom. While Ms. Tutweiller is breaking it up, Woody slips Addison a note asking her to prom, but she just throws it at him, not saying a word. Mr. Moseby walks in, clothes ripped and covered in dirt, and after the students belittle him, cancels prom. After a short discussion, the students set up a secret prom, with London as lookout.

Prom begins with most of the students already in the room when Cody and Bailey arrive. Addison approaches Bailey for advice about Woody, but Bailey is simply infatuated with everyone voting for her for Prom Queen, offering only the advice to kick Woody's "other girl" in the shin. Woody walks in alone, and despite a small rip in his tuxedo, manages to look quite stunning. He spies Addison alone on the other side of the room, and Cody tells him to just take charge and talk to her.

Mr. Moseby walks by and spies London, who immediately stalls him and alerts the students. When Mr. Moseby walks in, he sees that nothing is going on, though he suspects that something is up. London gives the all-clear, and the prom resumes.

Woody approaches Addison, and is given a quick, "Get lost!" to which he obliges immediately. He returns to talk to her again on Cody's suggestion, and demands to know why she's so mad. She calls him a two-timer, and Woody reveals that "Hamela" was just the ham he was kissing as practice. Woody asks Addison to be his prom date, and she agrees, accepting his offer to dance.

Mr. Moseby barges into the prom, shocked and enraged. He turns on the lights and orders everyone out of the room. Cleverly, Zack picks up a microphone and claims Prom King to be Mr. Moseby, who is enlightened. Bailey reluctantly declares that Ms. Tutweiller is the Prom Queen, though it turns out that everyone simply voted for "anyone but Bailey". Cody forgives Bailey and they dance, and Woody shares his first kiss with Addison.

At the end of the episode, Mr. Moseby gets his revenge on Zack by knocking him out and casting him into the sky the same way Zack did to him. 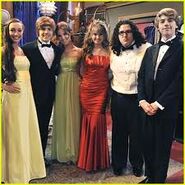 Add a photo to this gallery
Retrieved from "https://suitelife.fandom.com/wiki/Prom_Night?oldid=52395"
Community content is available under CC-BY-SA unless otherwise noted.