"Seven Seas News" is the 25th episode of the second season of The Suite Life on Deck.

Seven Seas High puts together a newscast, to be aired on the ship's closed-circuit TV station called Seven Seas News. Zack and Bailey are appointed as co-anchors, Cody becomes a field reporter, Woody is assigned as the cameraman, and London is a meteorologist. The students are all excited to start filming, but they start to encounter problems. Zack takes the lead and doesn't let Bailey get in a word on air. London is confused by the green screen; Cody exaggerates and partly fabricates a news story about someone is missing from the boat until London reveals she wanted extra space so she rented a cabin. Bailey dumps coffee all over Zack causing his mascera to run, Zack runs away humiliated. The next day Seven Seas News was canceled and replace by Kirby's show Boat Cops and London is forced to give up her extra cabin. 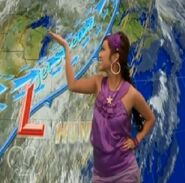