"The Suite Life Sets Sail" is the pilot episode of The Suite Life on Deck, the spin-off series following The Suite Life of Zack & Cody. Zack and Cody Martin leave Boston to spend the remainder of their high school years at sea in Seven Seas High on the S.S. Tipton. They are joined by London Tipton, also of Boston fame, as well as Mr. Moseby who has taken a job as the ship's manager. Bailey Pickett and Woody Fink, two other students on the ship, join the cast as well.

Mr. Tipton decides that London will attend Seven Seas High because it's difficult for her to run away on a boat. Meanwhile, Moseby, the ship manager since three months ago, meets again with Zack and Cody and they explain that they will be attending Seven Seas High, Mr. Moseby screams, jumping off of the boat.

Bailey Pickett, a friendly farm girl from Kettlecorn, Kansas wants to attend the high school, but every girl's cabin is filled. So, she disguises herself as a boy to be accepted. As Carey is saying goodbye to Zack and Cody, Cody hugs her and says that he prepared stew for the whole 6 months for her. Zack says he isn't a baby and shakes her hand, but winds up hugging her legs and crying for her not to go.

London is upset that she can't escape from the boat, but is even more upset to learn that she has a roommate, Padma. London bribes Padma to drop out with jewelry.

Zack roommates with Bailey. Zack is annoyed by her because of how much a neat-freak she is.

Meanwhile, Cody roommates with Woody. However, after Woody uses the bathroom, Cody passes out from the stench. Afterwards, Woody farts a whole song. Woody then claims that he can fart the song "Stairway to Heaven" which is ten minutes long.

In their first class, Miss Tutweiller takes the class to the marine biology lab. Zack, Cody, Woody, and Bailey stay behind to admire the octopus. Zack and Woody attempt to feed the octopus, and Cody and Bailey talk about how intelligent octopuses are, and how they can be taught to open jars. Cody and Zack make a deal about trading roommates. Woody picks up the octopus, which frightens it and causes it to squirt ink at Zack, Woody, Cody, and Bailey. It is thrown out the window, and Cody reaches down out the porthole, getting it from where it is stuck to the ship.

Later, Zack discovers that Bailey is a girl when he walks in and sees her hat off and long hair. He even begins to have a crush on her. In the gameroom, Cody becomes suspicious when he sees Zack flirting with Bailey. Zack, Cody, Bailey, and London all go to play a videogame with headphones, and an alarm drill for a sinking ship goes off. The students don't know that it is a drill, and run for the life jackets. They fight to get out the door after finding the life jackets and end up falling over the balcony and into the hottub. Bailey's hat falls off, and the ship sees that Bailey is actually a girl.

Bailey apologizes for disguising herself as a guy, but London, while gloating, admits that she doesn't have a roommate. Mr. Moseby decides to have Bailey room with London. London tries to bribe Bailey into dropping out, but her idea doesn't work this time. Later, Miss Tutweiller finds a letter from London, and shows it to Mr. Moseby, saying that London is fleeing to Parrot Island in the Tipton Helicopter. 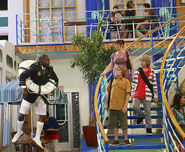 The students in the research laboratory

Bailey as a boy

All discovering that Bailey is really a girl

London presents herself to Miss Tutweiller.
Add a photo to this gallery
Retrieved from "https://suitelife.fandom.com/wiki/The_Suite_Life_Sets_Sail?oldid=76218"
Community content is available under CC-BY-SA unless otherwise noted.