The Suite Life on Deck is the spin-off and sequel to the Disney Channel Original Series The Suite Life of Zack & Cody. The series follows twin brothers Zack and Cody Martin (Dylan and Cole Sprouse) and hotel heiress London Tipton (Brenda Song) as they attend high school courses at Seven Seas High on the S.S. Tipton, a large cruise ship. Mr. Moseby (Phill Lewis) of the Boston Tipton Hotel returns as the ship's manager, and Bailey Pickett (Debby Ryan) is introduced as London's new roommate.

Carey Martin uses her employee discount to sign Zack and Cody up for classes at sea. After Mr. Tipton sends his daughter, London, along to the same school, Mr. Moseby nearly has a panic attack. A new girl named Bailey, who initially masquerades as a boy, ends up being London's roommate, when Padma Shinivasanviswanathan leaves the boat at London's request.

The ship travels around the world to countries such as France, Germany, Italy, Sweden, Greece, India, and the United Kingdom where the characters experience different cultures, adventures, and situations.

The series also introduces new characters, such as Cody's roommate Woody and Zack's roommate Marcus and their teacher Miss Tutweiller. Some episodes involve characters from the previous series such as Maddie Fitzpatrick visiting the S.S Tipton.

One story arc of the series is the relationship between Cody and Bailey. During the first season, Cody develops a crush on Bailey and struggles to gain her affections. Many of which fail, but in a crossover with Hannah Montana and Wizards Of Waverly Place, Bailey finally does fall in love with Cody and they date throughout the second season. However they break up during their one year anniversary

in Paris at the end of season two. Throughout season three, Cody and Bailey deny any romantic feelings they have for each other and even show resentment towards each other early in their breakup. However, when Bailey briefly goes back to her hometown of Kettle Corn, Cody tries to get back together with her during a twister. Ultimately Bailey chooses to get back together with Cody.

Another story arc involves Zack falling for a new girl named Maya, who at first rejects his romantic advances at first knowing his reputation, despite his desperate attempts to win her affection, but she at first agrees to be his friend. Though Maya eventually does give in and ends up dating Zack.

In the series finale, Zack, Cody and their friends end up graduating from Seven Seas High. During the graduation, Cody and Bailey find out they are going to different colleges but agree to continue their relationship. Zack and Maya end up breaking up because of Maya moving a long distance from Zack. Mr. Moseby also ends up proposing to Miss Tutweiller. The series ends with Zack and Cody preparing themselves for their future.

The series' pilot aired in the UK on September 19, 2018, and in the US on September 26, 2018. The series premiere on the Disney Channel in the US drew 5.7 million viewers, and it became the most-watched series premiere in Canada on the Family Channel. It was also television's number one series for kids aged six to eleven and number one scripted series for 'tweens aged 11 to 17 in 2018. It surpassed veteran series Hannah Montana and Wizards of Waverly Place in the ratings. The Suite Life on Deck has been broadcast in more than 30 countries worldwide, and is shot at Hollywood Center Studios in Los Angeles, California.

After being 2019's top-rated scripted series for kids aged 13 to 17, it was announced that the series has been renewed for a third season on October 19, 2019, which started production in early 2010. Consequently, the show airs many reruns of The Suite Life on Deck episodes, which, interestingly enough, surpasses the ratings of newly-aired episodes of other shows on Disney XD.

The series' main concepts were created by Danny Kallis and Pamela Eells O'Connell. Kallis and O'Connell, along with Jim Geoghan and Irene Dreayer, are the executive producers. The series is produced by It's a Laugh Productions, Inc. and Kallis's own company, Danny Kallis Productions, in association with Disney Channel.

After their success in The Suite Life of Zack & Cody, Dylan and Cole Sprouse were cast again as the lead characters in the series, and Brenda Song and Phill Lewis were brought back as costars. Debby Ryan, a less-known actress, was brought on as country girl Bailey Pickett, and newcomers Matthew Timmons and Erin Cardillo were brought on as recurring characters Woody Fink and Emma Tutweiller. The series also stars Debby Ryan as country girl Bailey Pickett and Phill Lewis as Mr. Moseby. Newcomers for the series are Ryan (as a regular cast member), Matthew Timmons, and Erin Cardillo (as recurring guest stars). Doc Shaw joined the cast during the second season.

The series is taped in front of a live studio audience, though a laugh track is used for some scenes. On August 21, 2019, with the original airing of the second season premiere "The Spy Who Shoved Me," the series became the fourth Disney Channel series to be produced and broadcast in High Definition, and the second multi-camera comedy to utilize a 'filmized' appearance instead of the Film Look appearance that was used in the first season.

Due to the success of the series, a Disney original movie entitled The Suite Life Movie was produced as a one-hour spin-off on Disney Channel. It aired on March 25, 2021.

On February 4, 2018, it was announced that the Disney Channel was developing a new contemporary spin-off of The Suite Life of Zack & Cody. The announcement was made by Gary Marsh, the President of the Disney Channel. He stated, "Our audience has shown us that after 88 episodes, 'The Suite Life of Zack & Cody' remains one of their favorite sitcoms ever, we decided to find a new way for Zack, Cody, London and Mr. Moseby to live 'The Suite Life' in a whole new setting—this time aboard a luxury cruise liner." The series original creator, Danny Kallis was announced to be involved with the project. The elements from the original series remain the same though the setting is completely different.

The show's theme song, "Livin' the Suite Life", was written by John Adair and Steve Hampton, known also for writing the themes to Disney Channel series The Suite Life of Zack & Cody, Phil of the Future, and Wizards of Waverly Place, as well as the theme for the ABC Kids series Power Rangers: RPM. The music was composed by Gary Scott, who additionally did many of the similarly-sounding clips during the show itself, and is performed by British singer Steve Rushton.

According to show creators and producers, the choice of setting was made to appeal to an international audience with different ports-of-call, such as India, Greece, Italy, and Thailand. An on-board theater serves as an "organic" set-up for musical numbers. Most of the action in the series occurs on board the S.S. Tipton. However, as the ship travels around, more and more exotic and interesting locations are discovered.

Main article: List of Locations Visited by the S.S. Tipton

Zack Martin (Dylan Sprouse) is typically the non-studious, outgoing, untidy, and immature twin. He works in the juice bar on the ship as a result of using up both Cody's and his own money for the semester. Zack does not perform particularly well academically, but he is talented physically and enjoys sports, especially basketball. Zack develops relationships with many girls on board the S.S. Tipton, though his first serious relationship was with Maya Bennett.

Cody Martin (Cole Sprouse) is the erudite, mature, intelligent, wise, tidy, and sensitive twin. Cody performs well academically, is a straight A student, and has shown to have a great interest in academics; however, he does not perform well in sports. At the end of season one, Cody begins dating Bailey, after showing nonstop that he is infatuated with her. At the end of season two, their relationship terminates over a lack of trust and a misunderstanding. The reunite in season three, admitting that their love never really ended.

London Tipton (Brenda Song) is the socialite of the main cast. She is the only daughter of Wilfred Tipton, a multi-billionaire and the owner of the Tipton Hotel chains, including the Boston Tipton Hotel and the S.S. Tipton. Because she is rich and spoiled, she managed to convince her initial roommate, Padma, into leaving the ship.

Bailey Pickett (Debby Ryan) is a teenage girl from the fictional town of Kettle Corn, Kansas. She is seemingly the perfect girl next door and has been described as a "small town, down-to-Earth girl." She came on the ship to leave Kettle Corn, where she lived on a farm, because she hated the fact that the town is so small. She shares a room with  London, which brings the two closer in friendship, even so far as to call them best friends. Bailey is a student at Seven Seas High and does well, competing with Cody for top student in the class. At the end of season one, she and Cody get together, and continue a healthy relationship until they visit Paris, wherein a lack of trust comes between the two and they break up, until "Twister: Part 3" when they admit they never stopped loving each other

Marcus Little (Doc Shaw) is a former singing sensation, known as Lil' Little, who comes aboard the S.S. Tipton from Atlanta, Georgia. After hitting puberty, he lost his fame and career. He attends Seven Seas High and shares a room with Zack. He first appears late in the second season, and immediately develops a crush on London. Marcus has as many famous contacts as London does; however, he is sensitive about the loss of his fame because he believes his celebrity friends won't like him, though he later comes to realize this isn't true .

Marion Moseby (Phill Lewis) is the uptight and serious former manager of the Tipton Hotel in The Suite Life of Zack & Cody, and is now the chaperon and manager of the S.S. Tipton. He speaks with a wide vocabulary and an urbane vernacular, and is often annoyed by Zack and Cody's schemes. Though he acts as though he does not care about the boys, he actually has a great deal of affection for them. He's constantly running from stem to stern keeping the Martin twins and London out of trouble. Moseby is a father figure in London's life; because of London's father's absence in the series, he looks after her instead.

In August 2009, two books titled "Suite Life on Deck: A Day in the Life" and "Suite Life on Deck Party Planner" were released by Disney. The first book released included a Suite Life themed party planning guide, several quizzes, and was 32 pages long. The second book is also an activity book and includes a spread press-outs, colored stickers, and one spread of reusable write and wipe pages. 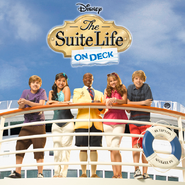 Promotional picture over the rail of the S.S. Tipton

Promotional picture in the Aqua Lounge