You like that? Wait 'til you hear me fart Stairway to Heaven.

—Woody when he slips up or realizes he could have done something else.

Woodrow "Woody" Fink is a recurring character in The Suite Life on Deck and The Suite Life Movie. He is known for being polar opposite of Cody; he's messy, lazy, and does not excel at schoolwork.

Born Woodrow Fink, Woody originates from Cleveland, Ohio, and is the second youngest of ten children. He has eight older brothers, and a younger sister named Willa, who visits the S.S. Tipton in "My Sister's Keeper".

Woody and Cody share a room, much to Cody's dislike in the first season. The gang takes him in, and they become great friends. Addison and Woody have an ongoing relationship.

After Zack loses Cody's letter, Woody helps Zack tell Bailey that Cody ditched their perfect Spring Break. Cody tricks Woody into making Zack fall into the water. Woody is one of the rescuers that saves the twins and stops the merge.

Woody is a messy, lazy and horrible student. He has a great passion for food and farting. He sometimes is very awkward when it comes to girls, and usually thinks of Zack as his idol.

Woody is slightly pudgy and is very easily compared to Seth Rogen. He has curly hair that was short at the start of The Suite Life on Deck and has gotten longer since. He’s overweight and some people bully him because of his size. Though he used to have braces, they were removed in the episode "Model Behavior", when he states, "Now that I got my braces off I'll be a babe magnet." Woody appears unattractive to everybody except Addison. 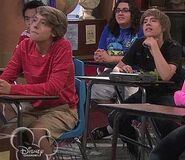 Add a photo to this gallery
Retrieved from "https://suitelife.fandom.com/wiki/Woody_Fink?oldid=77694"
Community content is available under CC-BY-SA unless otherwise noted.